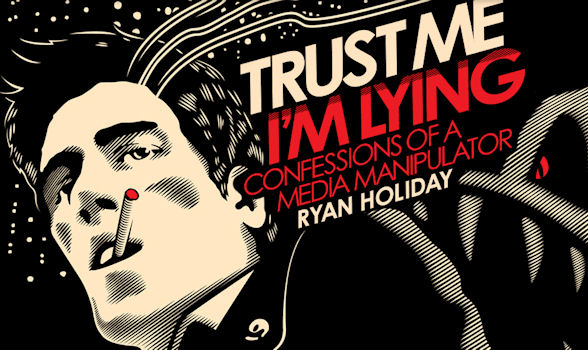 Blogs are built and run with an exit in mind.

An employee making \$60,000 a year would need to produce upward of 1.8 million pageviews a month,

Linkin Park’s YouTube account had done over 100 million views and would earn them barely six figures — to be split among six guys, a manager, a lawyer, and a record label.

2. Tell them what they want to hear

“There’s no difference between a journalist at The Guardian and the restaurant owner in Milan, who, when you ask for a taxi, calls his cousin who does a tour of the city to inflate the meter before showing up.” - Nassim Taleb

“The problem of journalism is that journalists are rarely in a position to establish the truth of an issue themselves, since they didn’t witness it personally.” - Edward Jay Epstein

Wikipedia acts as a certifier and exaggerator of basic information for many people. Press releases can be used word-for-word in articles.

3. Give them what spreads

Seeing the homeless and drug addicts and starving, dying animals would take away all the fun.

It’d make the viewers feel uncomfortable, and unsettling images are not conducive to sharing.

Reality is complicated and boring.

The web has only one currency, and you can use any word you want for it—valence, extremes, arousal, powerfulness, excitement—but it adds up to false perception.

4. Help them trick their readers

If I am creating the story as a fake tipster, I ask a lot of rhetorical questions: Could [some preposterous misreading of the situation] be what’s going on?

Stories with useful information are less likely to be shared virally than other types of content.

A story that provokes user to comment spreads. It might take as many as 10 page-views to leave a comment on a blog the first time. When you do this, you are the sucker.

The site doesn’t care about your opinion; they care that, by eliciting it, they score free page-views.

5. Sell something they can sell

The death of subscription means that instead of attempting to provide value to you, the longtime reader, blogs are constantly chasing Other Readers - the mythical reader out in viral land.

As a marketer, getting something “controversial” to blow up is easy, and it’s the tactic a media manipulator prefers to use over doing something “important.” With limited resources and the constraints of a tight medium, there are only a handful of options: sensationalism, extremism, sex, scandal, hatred.

6. Make it all about the headline

Come up with the idea and let them think they were the ones who came up with it. Basically, write the headline - or hint at the options - in your e-mail or press release or whatever you give to the blogger and let them steal it.

7. Kill them with pageview kindness

The post is correct, well-written information that needs no follow-up commentary. There’s nothing more to say except “Yeah, what he said.” Blogs are so afraid of silence that the flimsiest of evidence can confirm they’re on the right track. You can provide this by leaving fake comments to articles about you or your Unless readers can see the end of your post coming around eight hundred words in, they’re going to stop.

8. Use technology against itself

No matter how dull, mundane, or complex a topic may be, a good reporter must find the angle.

The second part of the book goes on about how the media is manipulated.

It reaffirms why I don’t read the news. They usually makes you feel that the world is ending.