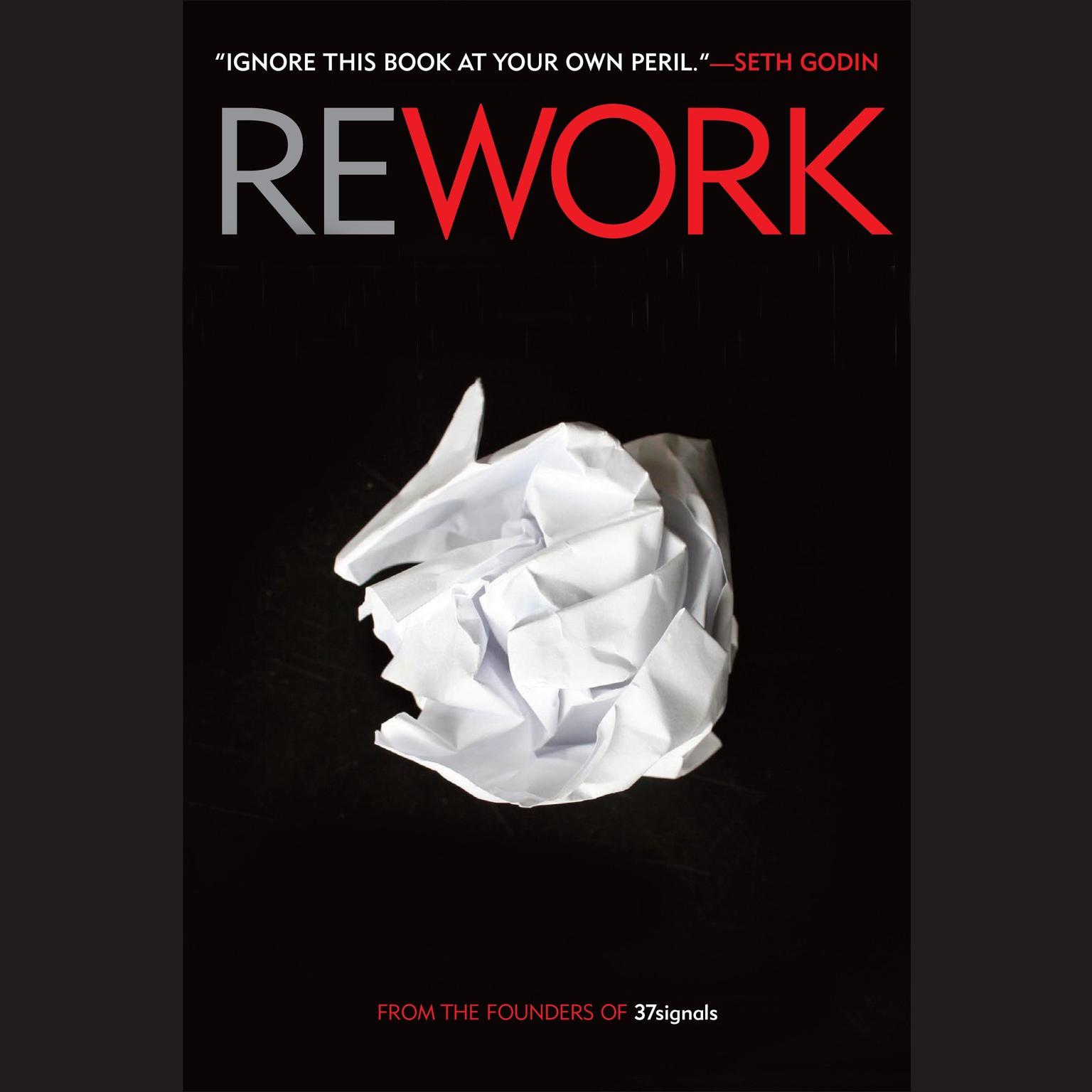 The real world isn’t a place, it’s an excuse. It’s a justification for not trying. It has nothing to do with you.

Unless you’re a fortune-teller, long-term business planning is a fantasy.

Start referring to your business plans as business guesses.

Decide what you’re going to do this week, not this year. Figure out the next most important thing and do that. Make decisions right before you do something, not far in advance.

To do great work, you need to feel that you’re making a difference.

You should feel an urgency about this too.

Ideas are cheap and plentiful. The original pitch idea is such a small part of a business that it’s almost negligible. The real question is how well you execute.

When you want something bad enough, you make the time.

A strong stand is how you attract superfans.

Standing for something isn’t just about writing it down. It’s about believing it and living it.

You give up control. When you turn to outsiders for funding, you have to answer to them too.

“Cashing out” begins to trump building a quality business.

It’s usually a bad deal. When you’re just beginning, you have no leverage.

You should be thinking about how to make your project grow and succeed, not how you’re going to jump ship.

Instead of focusing on getting customers to love you, you worry about who’s going to buy you. That’s the wrong thing to obsess over.

Constraints are advantages in disguise. Limited resources force you to make do with what you’ve got.

Cut your ambition in half. You’re better off with a kick-ass half than a half-assed whole.

The way to find the epicenter is to ask yourself this question: “If I took this away, would what I’m selling still exist?”

Ignore the details—for a while. Nail the basics first and worry about the specifics later.

You don’t have to live with a decision forever. If you make a mistake, you can correct it later.

Long projects zap morale. The longer it takes to develop, the less likely it is to launch.

It’s the stuff you leave out that matters. So constantly look for things to remove, simplify, and streamline. Be a curator.

People use equipment as a crutch. They don’t want to put in the hours on the driving range so they spend a ton in the pro shop.

What really matters is how to actually get customers and make money.

There’s probably something you haven’t thought about that you could sell too. Think about it this way: If you had to launch your business in two weeks, what would you cut out?

Before working on something…

It’s easy to put your head down and just work on what you think needs to be done. It’s a lot harder to pull your head up and ask why.

Interruption is the enemy of productivity

When you do collaborate, try to use passive communication tools, like e-mail, that don’t require an instant reply.

Find a judo solution, one that delivers maximum efficiency with minimum effort.

Problems can usually be solved with simple, mundane solutions. That means there’s no glamorous work. You don’t get to show off your amazing skills.

The way you build momentum is by getting something done and then moving on to the next thing. No one likes to be stuck on an endless project

The longer something takes, the less likely it is that you’re going to finish it.

That’s why estimates that stretch weeks, months, and years into the future are fantasies. The truth is you just don’t know what’s going to happen that far in advance.

Prioritize visually. Put the most important thing at the top.

If you think a competitor sucks, say so.

Worrying about the competition quickly turns into an obsession. What are they doing right now? Where are they going next? How should we react?

You can’t beat someone who’s making the rules. You need to redefine the rules, not just build something slightly better.

Say no by default

How should you keep track of what customers want? Don’t. Listen, but then forget what people said. Seriously.

The requests that really matter are the ones you’ll hear over and over.

Being obscure is a great position to be in. Be happy you’re in the shadows.

Instead of going out to reach people, you want people to come to you.

Instead of trying to outspend, outsell, or outsponsor competitors, try to out-teach them.

Chefs share everything they know. They put their recipes in cookbooks and show their techniques on cooking shows.

Give people a backstage pass and show them how your business works.

Don’t be afraid to show your flaws. Imperfections are real and people respond to real.

Wabi-sabi values character and uniqueness over a shiny facade.

Pare down to the essence, but don’t remove the poetry. Keep things clean and unencumbered but don’t sterilize.*

There’s nothing exciting about them. Journalists sift through dozens a day.

Instead, call someone. Write a personal note. If you read a story about a similar company or product, contact the journalist who wrote it. Pitch her with some passion, some interest, some life.

You’re better off focusing on getting your story into a trade publication or picked up by a niche blogger.

Emulate drug dealers. Make your product so good, so addictive, so “can’t miss” that giving customers a small, free taste makes them come back with cash in hand.

Marketing is not a department

Trade the dream of overnight success for slow, measured growth.

Start building your audience today. Start getting people interested in what you have to say.

Never hire anyone to do a job until you’ve tried to do it yourself first.

Always ask yourself: What if we don’t hire anyone? Is that extra work that’s burdening us really necessary? Can we solve the problem with a slice of software or a change of practice instead? What if we just don’t do it?

They’re too easy. Anyone can create a decent-enough resumé.

So how do you find these candidates? First step: Check the cover letter. In a cover letter, you get actual communication instead of a list of skills, verbs, and years of irrelevance.

Cover letter is a much better test than a resumé.

There’s surprisingly little difference between a candidate with six months of experience and one with six years.

They’ve run something on their own or launched some kind of project.

To make sure your remote team stays in touch, have at least a few hours a day of real-time overlap.

Two to four hours of overlap should be plenty.

Hire them for a miniproject, even if it’s for just twenty or forty hours. You’ll see how they make decisions. You’ll see if you get along. You’ll see what kind of questions they ask. You’ll get to judge them by their actions instead of just their words.

Getting back to people quickly is probably the most important thing you can do when it comes to customer service.

One of the worst ways is the non-apology apology, which sounds like an apology but doesn’t really accept any blame. For example, “We’re sorry if this upset you.” Or “I’m sorry that you don’t feel we lived up to your expectations.”

A good apology accepts responsibility. It has no conditional if phrase attached.

This is the worst: “We apologize for any inconvenience this may have caused.”

Show that you understand the severity of what happened.

An “I” apology is a lot stronger than a “we” apology.

“May” here implies there might not be anything wrong at all.

Most important thing to make an apology sincere: How would you feel about the apology if you were on the other end?

When people complain, let things simmer for a while.

You don’t create a culture. It happens. This is why new companies don’t have a culture.

Cut the crap and you’ll find that people are waiting to do great work. They just need to be given the chance.

When everything constantly needs approval, you create a culture of nonthinkers.

That time doesn’t magically convert to work. They’ll just find some other diversion.

You’re not going to get a full eight hours a day out of people anyway. That’s a myth.

Policies are organizational scar tissue. They are codified overreactions to situations that are unlikely to happen again.

So don’t scar on the first cut. Don’t create a policy because one person did something wrong once. Policies are only meant for situations that come up over and over again.

There are four-letter words you should never use in business: need, must, can’t, easy, just, only, and fast.

Need. Very few things actually need to get done. Instead ask “What do you think about this?”

Easy. “That should be easy for you to do, right?” But notice how rarely people describe their own tasks as easy.

Also watch out for their cousins: everyone, no one, always, and never.

This is the worst paragraph you can say:

“We need to add this feature now. We can’t launch without this feature. Everyone wants it. It’s only one little thing so it will be easy. You should be able to get it in there fast!” Only thirty-six words, but a hundred assumptions. That’s a recipe for disaster.

And if you add ASAP to the end of every request, you’re saying everything is high priority.

What doesn’t last forever is inspiration. Inspiration is like fresh fruit or milk: It has an expiration date. If you want to do something, you’ve got to do it now.